Our trip in the spring of 2014 grew out of a conference Ted was planning to attend in Amsterdam. Little by little, other cities were added (“I’ve always wanted to see Bruges… Provence is nice in the spring… We can get a cheap flight out of Cologne….”) and pretty soon we found ourselves planning the type of multi-country, move-every-few-days type trip we usually scorn. No matter – we had a great time anyway.

Bruges is a city almost literally lost in time. A major commercial center in the Middle Ages, it lost much of its importance when its channel to the sea silted up, and its architecture hasn’t changed much since the 16th C. Surrounded by canals, it evaded the carnage of the First World War, some of which took place only 40 km away. 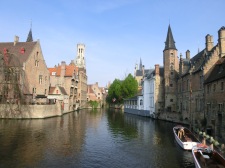 Bruges and its canals

Today, Bruges’ economy is based mainly on tourism. It is well-organized for welcoming its visitors, without being overwhelmed by them.

In addition to its lovely canals, Bruges is known for its “Flemish Primitive” painters (Memling and Van Eyck), a Madonna by Michelangelo (one of the few Michelangelo statues outside of Italy, and quite a nice one) and chocolate shops, which seemed to comprise about half the commercial establishments. In addition to well-known brands like Godiva and Leonidas, Bruges is home to more individualist chocolate shops offering funky flavors like chili pepper and cannabis. I didn’t inhale.

In Bruges (and also later in Amsterdam) we visited the Begijnhof, once the home of a lay Catholic sisterhood (women who lived as nuns without taking vows).   Whatever their religious motivations, these women sure knew how to pick lovely locations, and these places are an oasis of peace (especially in Amsterdam) in otherwise modern surrounding. These days, the Begijnhof in Bruges is home to real nuns (Benedictine). In Amsterdam, the Beguine community survived in otherwise Protestant Holland until the 1970s; today, the place is a residential community for single women, so maybe things haven’t changed that much.

Around and Around We Go

From Bruges, we went to Amsterdam, a place where the canals go in circles. The names of the canals, as the guidebook helpfully noted, are in alphabetical order, so you always know how far from the center you are. Unfortunately, you can’t tell where on the circle you are – it is possible to be two blocks from your destination and have no idea which direction to go. No matter – most Amsterdam residents speak excellent English, and are more than happy to help.

We stayed at a small hotel in the Museum Quarter, just a few minutes’ walk from each of Amsterdam’s main art museums – the Rijksmuseum, the Van Gogh Museum and the Stedelijk Museum of Modern Art. At the recently renovated Rijksmuseum, Rembrandt has pride of place, particularly the painting long known as the Nights Watch (which, since its recent cleaning, apparently was painted in the daytime, albeit indoors) and the painting formally known as the Syndics of the Drapers’ Guild, but forever known, to those of us as certain age, as the painting on the box of Dutch Masters cigars. The Van Gogh Museum has an excellent collection of earlier works, painted while the artist was still living in the Netherlands, as well as a skeleton smoking a cigarette that seems amazingly modern. The Stedelijk had an interesting collection with informative captions that kept even those of us not generally fans of modern art interested.

While Ted was at his conference, I visited the Jewish History museum, which was next door to the Portuguese Synagogue.   When it was built, in 1675, it was the largest synagogue in Europe. Jews were welcomed into the newly independent Netherlands. For most of the 17th C, in fact, Jews faced fewer restrictions on the practice of their religion than Catholics did – surely the only time in European history that was the case.

Amsterdam is also reputed to have a tattoo museum. Unfortunately, I was unable to find it – just as well. They apparently have a tattoo studio on the premises – who knows what might have happened?

No We’re Not On a Cruise

After Amsterdam, we went to Cologne. Although we arrived in the city by train, apparently Cologne has been discovered by the river cruise lines, and we saw a number of tour groups of various sizes.

Cologne is famous for its cathedral, which is of massive size – as long as its tower is high. It was completed in the 19th C, with support both from the Protestant king of Prussia and the Catholic king of Bavaria – a rare example of religious harmony.

In addition to its cathedral, Cologne has a number of Romanesque churches, and a small museum which offers excellent examples of stained glass and statuary usually hard to see close up. Cologne is also famous for its toilet water, “Eau de Cologne,” called 4711 after the address of the store which first sold it. These days, it is sold in as many outlets as Bruges has chocolate shops.

Being secular humanists, we had no idea, when we arranged some months ago to spend a few days in Provence with our friends Ken and Mary Lou, that the weekend we had picked included Easter Sunday. It turned out to be a pleasant coincidence, since their daughter Eva (currently a student in London) and Ken’s mother Betsy, who lives in Canada, were also visiting. We had “Gigot de sept heures” (leg of lamb cooked for 7 hours) a delicious dish which we hope to try out with our cooking group very soon.

After this visit, we spent a few days in Arles, and took a day trip to the Camargue, which has a noted bird sanctuary (and seemingly hundreds of flamingoes – thrilling in flight). We visited the town of Aigues-Mortes, once an important embarkation point for French crusaders.  The country of France was much smaller in the Middle Ages than it is today, and Aigues-Mortes was its only outlet to the Meditteranean.

In later years, Aigues-Mortes was an important outpost of the free-thinking Albigensians and later still, not by coincidence, of Protestants. In the 18th C, the tower once used by Crusaders was used to imprison Protestant women who refused to abjure their faith – one of the awful consequences of religious persecution that the founders of our country surely had in mind when they drafted the First Amendment.

From Provence, we drove to Spain, stopping first at the Abbaye de Fontfroide, near Narbonne. Fontfroide is also important in the annals of Albigensianism, since it was the murder of a Papal legate, a monk of Fontfroide, by Albigensians, which started the Crusade against them by the institutional Church, which ultimately destroyed them. The monks are gone now, and the former abbey is now a museum, with a very nice garden.

We stayed for a couple of days in Girona, in Catalonia. By another happy coincidence, we arrived on St. Jordi’s day, which is a local public holiday (St. Jordi, or St. George, is the patron saint of Catalonia).   The holiday is an excuse for a massive street fair, in which the traditional gifts are books for men and roses for the ladies. [Insert sexist joke here.]

That night, we ate at Massana, the second best restaurant in Girona, which, given that the “best” restaurant, Can Roca was recently named the best restaurant in the world, was awfully darned good. The chef combined Spanish ingredients with a Japanese sensibility, producing stunning results.Girona is also the home of an insanely popular ice cream shop, run by Can Roca’s pastry chef, which featured a “panet” – a turnover-like pastry, served warm, with ice cream still cold on the inside. How do they do that?

In addition to some fine Romanesque churches, Girona also features an interesting Jewish history museum – all the more amazing since there essentially hasn’t been a Jewish community in Girona since 1492. It was very well done – one of the visitors signing the guest book noted, “I’m from Israel and even I didn’t know this stuff.”

We also visited an interesting river house done by a local architect named Maso, a contemporary of Gaudi. Although not as revolutionary as Gaudi, Maso used many forward-looking techniques, particularly in the use of ventilation and natural light.

All in all, quite a lot to see in this little town, and well worth a 2-day visit.

More Than a Soccer Team

We had visited Barcelona once before, in 2001, and if anything liked it even more this time.

Casa Battlo, a private home designed by Antoni Gaudi, has recently been opened to the public. To say it was breathtaking is not to do it justice. Gaudi was apparently given a free hand by the owner, and he designed not just the residence but the furniture to go in it. Marks of Gaudi’s genius are everywhere – from the creative use of natural light, to the use of recycled materials (tile and glass) for decoration, to his characteristic “caternary arches” for ventilation. Just stunning.

La Sagrada Familia is still under construction, but the interior has been enclosed since we were last there and it is now an operational church. Fortunately, we had been told to reserve an entry time online – even on a weekday morning in April, the wait on the “unticketed” line was over an hour.

We have visited a lot of Gothic cathedrals over the years, but this one literally left me speechless. Gaudi, a deeply religious man, spent most of the last 20 years of his life on the cathedral, and it is clearly a place of faith, not power (more Chartres than St. Peter’s). Gaudi clearly intended to bring the Gothic cathedral to the modern age – using modern materials, modern construction techniques, and modern engineering – parabolic arches instead of flying buttresses. He looked to nature for some of his design ideas, long before anyone had heard of fractals. And yet, despite the modernity, this is still recognizably a “Gothic” church, with the characteristic cruciform design, stained glass windows, and soaring walls.  A masterpiece, and the highlight of our trip.