One of the nice things about living in Italy is the ability to take short trips within the country to look at art. The Italian train network provides easy access to all the country’s major cities.  In addition to all the art that’s normally here, Italy gets its fair share of art exhibits on tour from other countries.

Accordingly, we spent a few days recently in Bologna looking at art.  As it happened, there were three separate exhibits of 20th C art going on at once.  Although the art came from different countries and covered somewhat different periods, they spoke to each other in unexpected ways.

The most interesting exhibit covered Russian art of the early 20th C, from just before to just after the 1917 Revolution.  The art was full of the exuberance of new-found freedom and hope for a better future, after the overthrow of the sclerotic dominion of the Czars. You can see this joy particularly in the painting by Marc Chagall, as Russian Jews were now free of the significant restrictions on where they could live and work imposed by the Czars.  Many Russian artists also experimented with abstract forms, as if the definition of art itself was up for review. 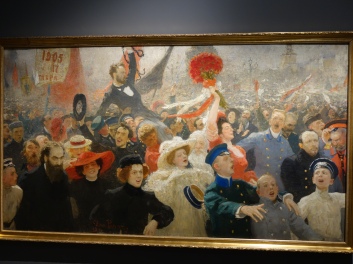 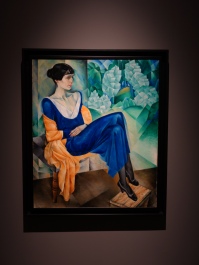 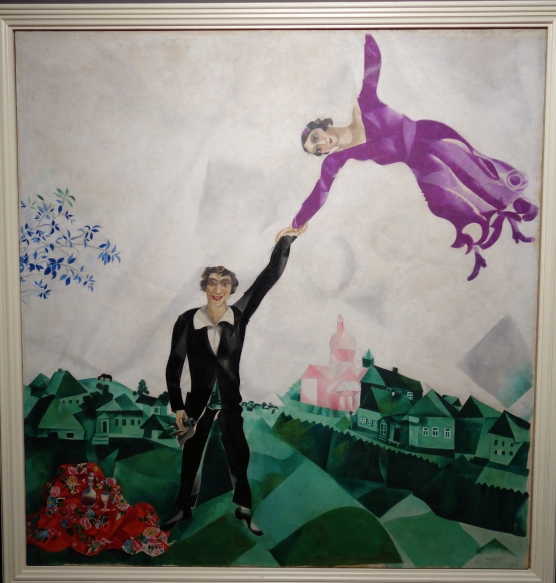 Alas, the new hope was not to be – within 15 years, the wild and free art of the revolution had been replaced by leaden depictions of Soviet workers listening intently to Stalin’s speeches.  Stalin might have come to power in the aftermath of a revolution.  But once installed as autocratic leader, Stalin had no use for revolutionary art.  The art of the revolution was hidden away, not seen again in Russia for 50 years, and little seen outside Russia even now, for example the disturbing work of Pavel Filonov seen below. 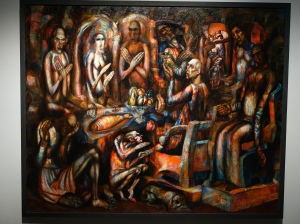 The exhibit included a short propaganda film done in the 1930s, illustrating what were said to be the improvements in the life of the poor under Communist rule.  The film included the irresistible image of a well-fed Lenin sitting on a similarly overstuffed chair, stroking a long-haired white cat sitting in his lap.  You knew those movie guys had to get their ideas from somewhere, didn’t you?

A second exhibit, Dadaism and Surrealism, might have been subtitled, “Revolutionary Art in Countries Without Revolutions.”  Dadaism didn’t speak to me — I remain unconvinced that a bicycle wheel on a pedestal is “art.”  But the Surrealists, who used the newly popular theories of Sigmund Freud to experiment with different visual perspectives, were truly fascinating.  I was particularly taken by the Andre Masson’s depiction of Goethe as a  multi-dimensional naturalist, and Rene Magritte’s depiction of castles in the sky which literally turns this dream landscape on its head. 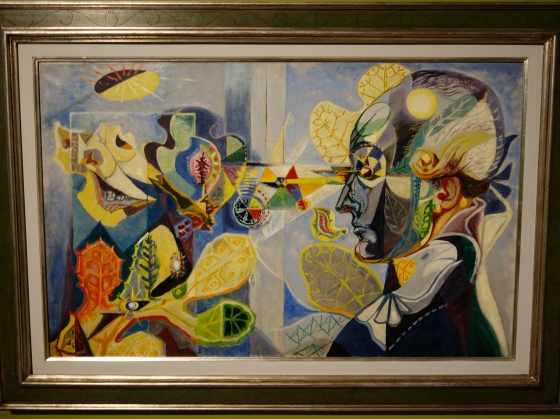 Masson: Goethe or the metamorphosis of plants

Magritte: The Castle of the Pyrenees

The third exhibit collected works by three Mexican artists, José Clemente Orozco, Diego Rivera and David Alfaro Siqueiros, all of whom were famous for depicting post-revolutionary Mexico, sometimes with a jaundiced eye. 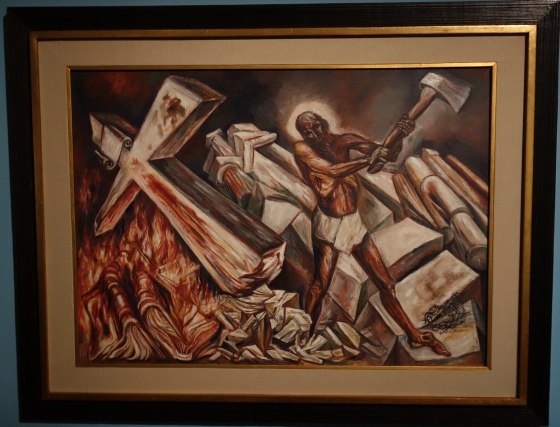 The exhibit itself has an interesting back story.  It was originally supposed to open in Santiago, Chile, on September 13, 1973.  Two days before the exhibit was to open, Salvador Allende was overthrown.  The new leader of the country, Augusto Pinochet, was another autocrat who had no interest in revolutionary art (particularly when two of them were card-carrying Communists).  The art was packed up and sent back to Mexico.  The “suspended exhibit,” as it became known, finally opened in Chile in 2015, and is now in Bologna on the first stop of a European tour.

Of course, not all revolutionary art in Bologna was created in the 20th C.  The church of St. Paul has an altarpiece believed to be by Francesco Borromini, the king of the trick perspective. 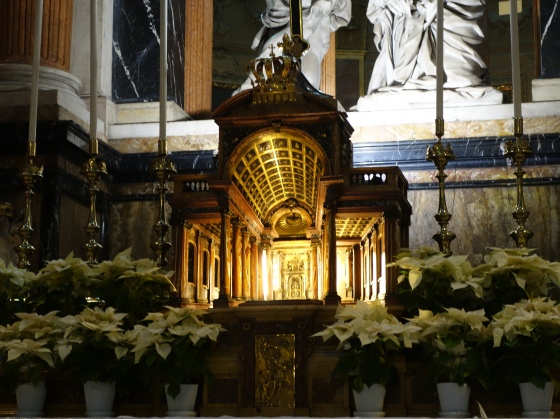 The church of St. James has a chapel with a surprisingly vivid 15th C depiction of the Apocalypse.  The cathedral has a strikingly original visual representation by Giovanni da Modena of the cosmology of Dante’s Divine Comedy, with unforgettable depictions of the denizens of Dante’s Inferno.  If you’ve seen that Tom Hanks movie, you’ve seen these frescoes. 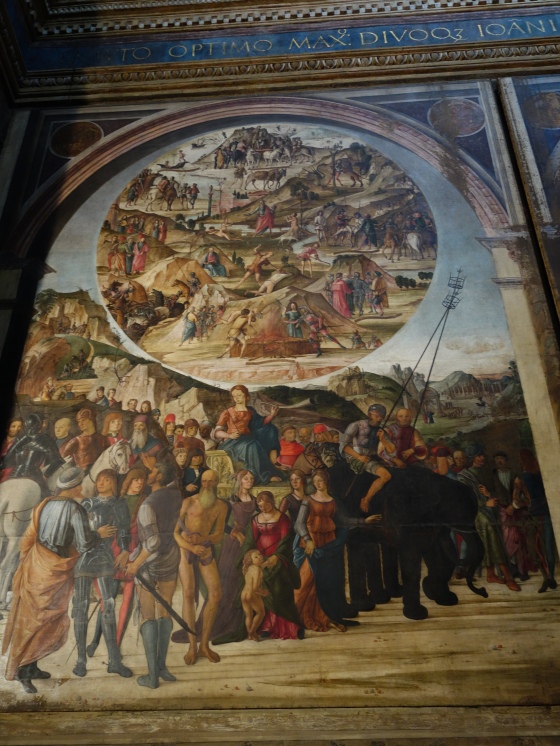 Bologna is also home to the tomb of St. Dominic — a Spaniard who spent most of his life in France and for some reason died in Italy.  The Dominican tomb has the obligatory depiction of “God’s dogs” (domini canes to the punny medievals ).  The tomb monument also has a couple of statues executed by a very young Michelangelo, who even then couldn’t resist depicting ethereal angels with lots of musculature. 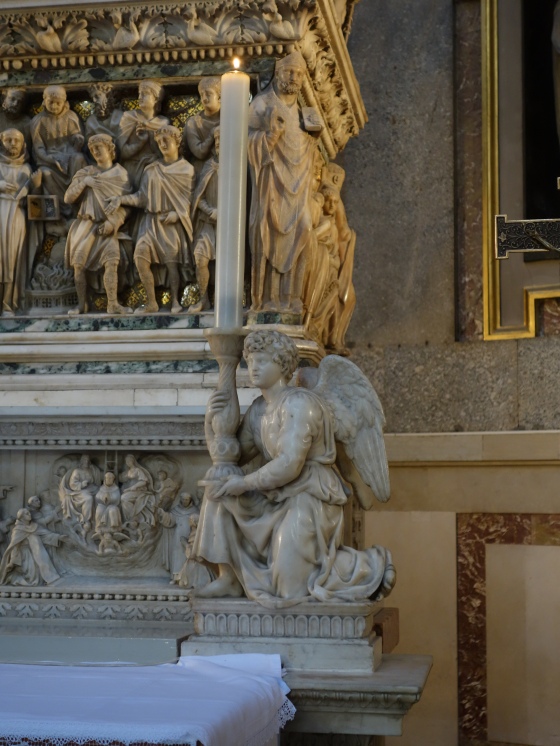 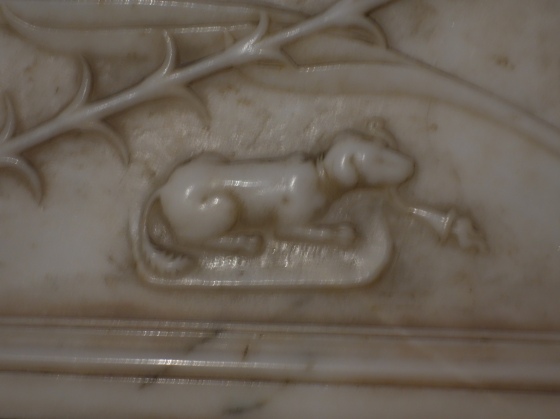 And of course, there was the food…. 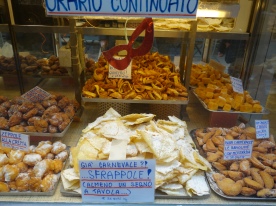 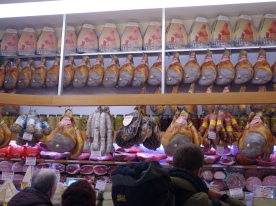 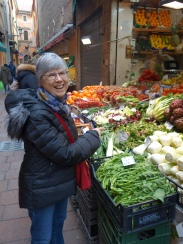 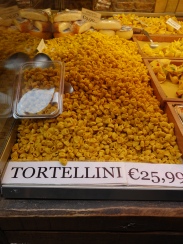 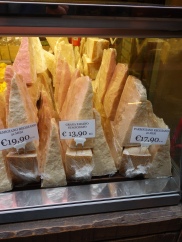