We recently completed a 12-day tour of England, our first trip outside Italy since we moved here last fall.  We have a particular interest in “Gothic” cathedrals, of which there are many more in England than there are in Italy.  So we combined visits to old friends in Oxford and London with visits to come notable cathedrals.

Since it takes about three hours to drive from Ascoli to Rome, we decided to head down the night before our flight to London and spend an afternoon at Ostia Antica, which is close to Rome’s Fiumicino Airport.

Ostia was ancient Rome’s Mediterranean port.  Since the Tiber basin silted up over the centuries, the ancient site is now several kilomaters from the coast.  However, it is still possible to see the streets of the old city today much as they appeared in the late Imperial era.  Ostia was a working class town, largely populated by mariners, longshoremen and itinerant sailors, which probably explains the large number of taverns.  The town also had an unusual number of public bathing facilities (few of the inhabitants had villas with their own water supply).  You can still see the mosaic floors of many of these bath houses, many with whimsical designs.

There is also a small museum, with high-quality Roman sculptures. 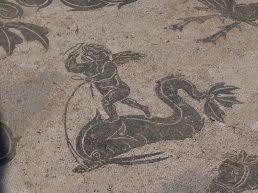 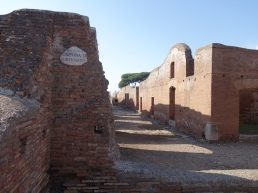 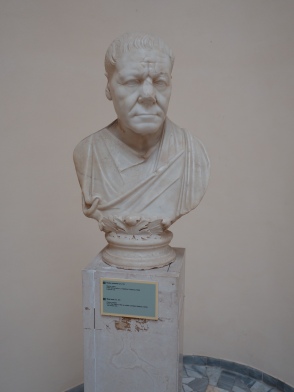 In the Middle Ages, Lincoln was the seat of the largest diocese in England, and was the site of the country’s first French-style Gothic cathedral (probably inspired by its bishop, who was a Frenchman). An older cathedral, in Romanesque style, had been built on the site shortly after the Norman Conquest, but it was heavily damaged by an earthquake in the next century.  The current cathedral was started in 1190, around the same time as Chartres, although the spire was not completed until about 1350.  For about 200 years after that, the cathedral was the tallest building in Europe (and maybe the world) until the spire blew off in a hurricane in the 16th C.  The spire was not replaced. 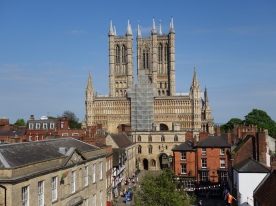 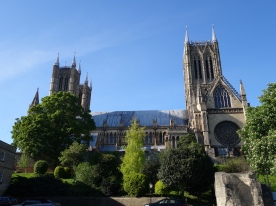 Like many cathedrals in England, Lincoln Cathedral suffered significant damage during the Cromwell era.  Most of the stained glass windows were destroyed.  There are bits and pieces of the original glass in the rose windows, although the original design has been lost.  Most of the windows seen today are 19th C reproductions.  Fortunately, most of the magnificent stonework, the true glory of this cathedral, was not damaged.  The master mason is believed to have depicted himself in one of the sculptures, noted by his mason’s cap and (hard to see in the photo) tiny representations of his masons’ tools behind his ear. 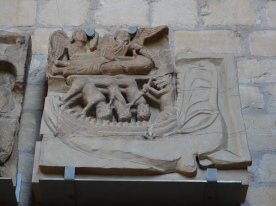 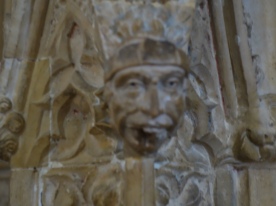 We forget, sometimes, what technological marvels these cathedrals were, given the tools of the day.  Everything, even the nails, had to be made by hand.  Modern visitors can take a “roof tour,” where you can go up in the rafters and see some of the original beams (which today are reinforced, but which are still doing most of the load bearing work).  From the rafters, you can also get a good look at where the “newer” church, started from the altar at the east end, joined the older church portal at the western side.  The two sides don’t quite meet up, and from the upper level you can see the little “jog” they made to make the two parts join. 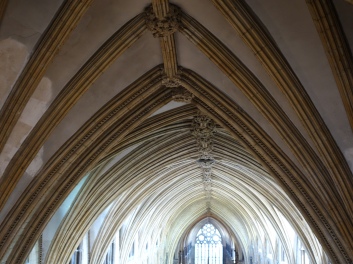 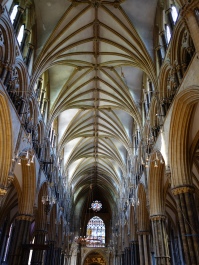 We also visited Lincoln Castle, just across the courtyard from the Cathedral.  This courtyard was the site of the Battle of Lincoln in 1217, which some historians have called the most important battle on English soil after Hastings. 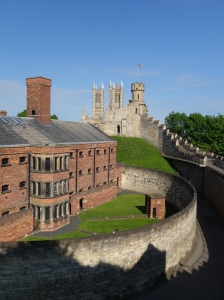 A few months after King John signed the Magna Carta in 1215, he convinced the Pope to annul the agreement, on the grounds that he had signed it under duress.  A few months after that, he was dead, succeeded by his 9-year old son, Henry III.  A number of English barons, who at that time owned property on both sides of the Channel, threatened to switch their allegiance to the king of France.  The regent, William Marshall, had the brilliant idea of offering restoring the Magna Carta, which gave the barons a number of rights vis-a-vis the sovereign, as an inducement to stay with England.

A group of barons nevertheless wanted to switch over their allegiance, and under the command of Prince Louis (later Louis VIII of France) they laid siege to Lincoln Castle.  The attackers held the high ground — the narrow space between the castle and the cathedral, on top of a steep hill (today called, oddly enough, Steep Hill) which they thought no one could fight their way up. Under cover of nightfall, William Marshall and a small armed force sneaked in the back side of the castle on foot.  When the English forces streamed out of the castle the next morning, the surprised besiegers found their “high ground” was a trap.  Forced into close combat at the cathedral door, they eventually retreated down Steep Hill, got back in their boats, and hightailed it back to France, never to return.

Sometimes great moments in history hang by a thread.

King’s College, started by Henry VI in the 15th C, was designed to provide higher education for young men with more promise than money.  The associated Chapel, begun by Henry VI, was  finished a century later by Henry VIII.  The design work — the sculpted coats of arms, the stained-glass windows and, especially, the magnificent fan-vaulting of the ceiling — is stunning.  Even Cromwell couldn’t bring himself to destroy the stained glass here (perhaps because there are more kings depicted here than martyrs and saints.)  The large central wooden screen celebrates the marriage of Henry VIII and Anne Boleyn (see the inscriptions “HR” and “HA”). 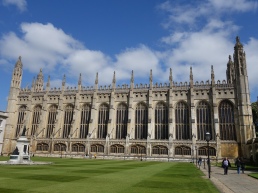 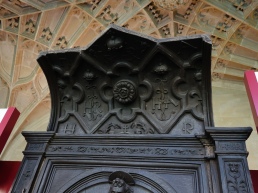 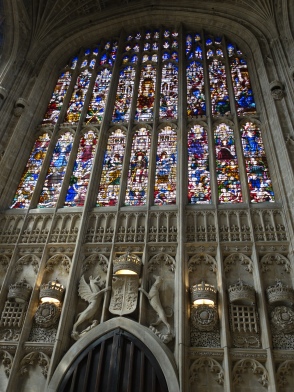 King’s College is famous for its “evensong,” a choral service held almost every evening which highlights the church’s awesome acoustics.  The service was in English, but the choral works, quite surprisingly to me, were sung in Latin.

And was that wild flower up in the King’s College tower: Scotch broom; known in medieval times as “plantagenet” (e.g., sprig of broom)?  I couldn’t find anyone to confirm, but I suspect an (unofficial?) horticultural tribute to Henry VI. 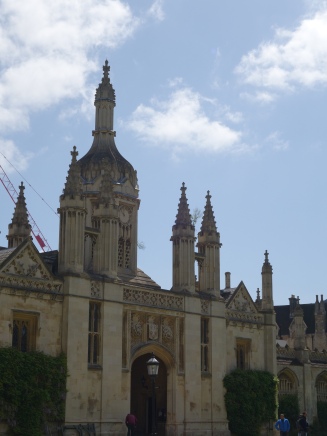 Ely, only a short train trip from Cambridge, has a stunning cathedral known more for its size than its ethereal beauty.  Oliver Cromwell grew up in Ely, so he made rather a point of stripping it of its decoration, even decapitating the statues of saints. 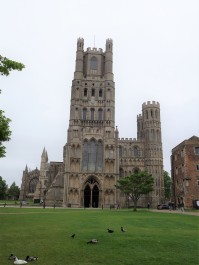 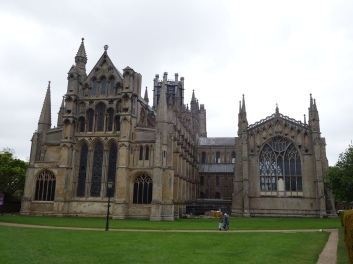 The cathedral was restored in the 19th C, but here, instead of reconstructing the medieval decoration, they decorated the ceilings and windows with then-popular pre-Raphaelite designs.  Not everybody, then or now, is happy with this period juxtaposition, but I rather liked it. 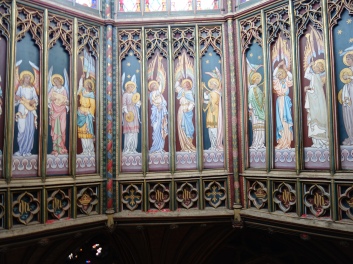 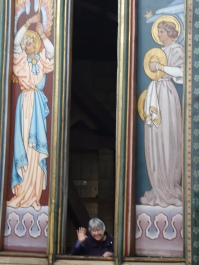 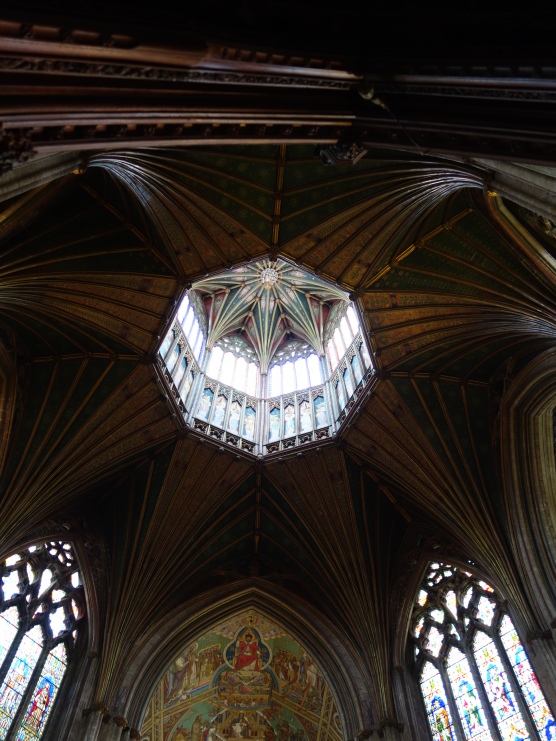 Ely also offers a tower tour, which gives a close-up view of some of the 19th C art.  The tower was originally designed for a choir — the monks would climb the narrow staircase and sing from the windows strategically placed around the inside of the tower.  These days, if you get married in the cathedral, you can arrange to have confetti dropped from rafters — but it takes a bit of math to compute how long it will take for the confetti to reach the ground from such a height.

Maybe I was suffering from cathedral overload, but I found this the least architecturally interesting of the three cathedrals we visited, perhaps because its interior had suffered the most damage over the centuries. The cathedral is, of course, of great historical importance.  Totally by accident, we entered the cathedral through the “murderer’s door”- the same door by which Thomas Becket’s assassins entered.  In medieval times, Canterbury was a major pilgrimage site where travelers from distant lands came to seek healing or forgiveness of sins from Saint Thomas.  Henry VIII was having none of that in his unitary monarchy: he was both the church and state.  Thus he despoiled the magnificent shrine dedicated to Becket’s memory.  Today it is memorialized only by candles on the pavement. 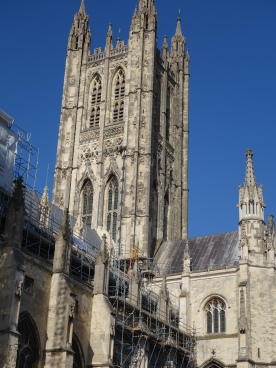 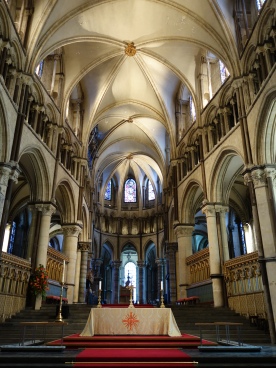 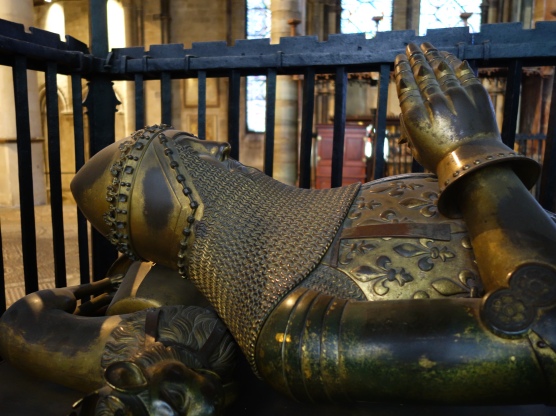