We took a short trip to Rome last week, our first extended trip to the capital since we moved to Italy last year.  Although Italy has an extensive train networks, from Ascoli Piceno the quickest way to get to Rome is by intercity bus, through the Appenines via the route of the ancient via Salaria.

Since we had been to Rome before, we decided to concentrate on less-frequently visited sites during this visit.  I have a particular interest in mosaics, an art which flourished in late antiquity and during the medieval period.  Rome has comparatively few monuments during this period — the city’s population declined from 1 million during the imperial period to perhaps 50,000 at the beginning of the 15th C, and didn’t recover until a series of Popes, beginning in the latter half of the 15th C, decided to restore the city to something approaching its former magnificence.  But medieval monuments are there if you know where to look.

The church of Santa Maria Maggiore, one of the 4 basilicas in Rome administered by the Vatican, has wonderful mosaics dating from both the 5th and 12th Centuries.  Just down the street, the church of Santa Prassede has some fascinating mosaics dating from the 9th C.  The mosaics in both of these churches follow what is known as the “Byzantine” style — no perspective, no individualized faces — but I found them quite lovely.

In the church of Santa Maria in Trastevere, there is a wonderful 12th C mosaic of Jesus and Mary in heaven.  Jesus has his arm around Mary (a traditional Byzantine pose) but there was a certain affection in his gaze (unfortunately difficult to see in the photograph).

At the nearby church of Santa Cecilia in Trastevere, we saw some frescoes done by the same artist, Pietro Cavallini.  The frescoes are not in the main church — they are in an upstairs room and you have to pay a small admission charge.  I have just enough Italian now to follow the guide’s explanations — good thing, because there were no written captions.  The guide was eager to point out the individualized expressions in the faces of the Apostles — something supposedly invented by Giotto, who worked about 50 years later, and an early harbinger of the Renaissance.

Despite what to us appears as forward-looking artistry, the frescoes were plastered over by a Renaissance-era cardinal, who found them old-fashioned, and only rediscovered during building renovation work in the 1930s.  Portions of the original frescoes have been irretrievably lost — St. Michael, for instance, was identifiable only by his sword and metal breastplate.  But as the fortuitous consequence of not being exposed to the air for several hundred years, the colors are still almost as vibrant as originally intended, without restoration.  No photos were allowed in this room — the picture you see here is scanned from postcards.

We took a special tour of the Vatican which began with breakfast in the museum courtyard.  The 2 hours allotted to the Vatican Museum allowed for only the highlights — you could easily spend a whole day there — but it was nice to skip the line and get an early start.  The Sistine Chapel seems to be crowded no matter when you go, and is patrolled by guards who strictly enforce the no-photo rule (photos are allowed elsewhere in the Vatican).  The guards’ other function seems to be to keep people moving, otherwise the number of people too awed to move would quickly create traffic jams in the rest of the museum.  The guards reminded me of the demons in Michelangelo’s Last Judgment, prodding along the reluctant souls of the damned with their pitchforks — too bad I can’t post a photo!  You’ll have to settle for a photo of one of the nearby “Raphael rooms”.

I saw the Sistine Chapel for the first time in 1970, before the major cleaning project begun in the 1980s, and remember being somewhat disappointed — 400 years of candle smoke had rendered much of the work too dark to see.  The restoration is controversial in some quarters — some people think they took off some of Michelangelo’s paint along with the candle soot.  But you’ll never convince me that these strong, vibrant colors aren’t what Michelangelo intended.

We also saw St. Peter’s on the tour, and I was as underwhelmed by the church as I have been in the past.  I know it’s a minority view, but something about the church’s sheer size (they have marks on the floor showing the limits of “lesser” cathedrals like St. Paul and Notre Dame) seems to me inconsistent with the Church’s spiritual message.  They’ve got some great art in there, though, including Michelangelo’s Pieta.

Interestingly, virtually all of the “paintings” in the church are actually mosaics, although you have to get really close to see that.

Having seen at least one of Rome’s major sights, we returned to smaller sights for the last couple of days of our trip.

The Palazzo Colonna has been the home of the Colonna family for eight centuries.  These days, part of the Palazzo has been turned into a museum, open only on Saturday mornings, which displays the family’s art collection (Bronzino, Perugino, Carracci….) 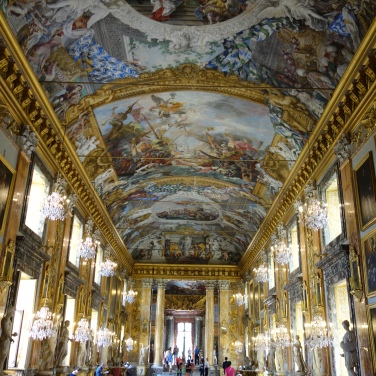 The battle of Lepanto in pictures

Marcantonio Colonna played a big part in the victory of the “Holy League” (Venice, Spain and the Papacy) over the Turks at the Battle of Lepanto in 1571.  Colonna lost no time celebrating his victory with a series of magnificent ceiling murals depicting the battle — it’s awesome, but a bit over the top.  The palazzo had another moment of dubious fame in 1849 when some republicans (of the Roman variety) were holed up there, but were later driven out by French (pro-Papal) forces.  A cannon ball which arrived in the gallery at that time has been preserved where it landed.

On our last day, we visited what we thought was a standalone stained glass museum just outside the center.  The museum is actually at the Villa Torlonia, which has the unfortunate distinction of having been Mussolini’s official residence.  The house and grounds fell into disrepair after the war, and in the 1990s the Italian government decided to restore the place into the 19th C aristocratic villa it had originally been.  These days, the main house and several associated buildings feature exhibits of Italian art during the early 20th C.  We were particularly interested in the exhibit devoted to modern theatrical productions at Italy’s ancient Greek theaters, since we had enjoyed a performance at the ancient  theater in Siracusa (Sicily) a few years ago.

The stained glass museum is located in one of the buildings on the grounds, the Casina delle Civette, or Owl House.  This was the home of the last scion of the Torlonia family, who was apparently an unsocial fellow who preferred the company of owls, bats and other birds of the night.  He was, however, also a stained-glass enthusiast, and much of the work here was done by the best Italian stained glass artists of the early 20th C, and it has a particular style, quite different from that of the more familiar French and American stained glass artists working at the same time.  The whole place is worth a visit, if you have the time.

One more note — during an evening tour of Trastevere, our guide pointed out a 19th C building with the Latin inscription — PIUS IX P M OFFICINAM NICOTIANIS FOLIIS ELABORANDIS A SOLO EXTRUXIT ANNO MDCCCLXIII.  The building was Pope Pius IX’s official cigarette rolling factory, built in 1863. In many parts of Europe, even today, the government has a monopoly on tobacco sales, and it has been an important revenue source. These days, though, the Vatican bans the sale of tobacco in its tiny state.