One of the great things about living in Italy is that, within only a few hours’ drive, you can arrive at a place with its own, quite distinct history.  It’s like a whole continent in one country.  Here are some brief notes on four recent destinations.

Ravenna is best known today for its remarkable mosaics which are in remarkably good condition despite their great age.  The iconography of the mosaics is quite different from those of medieval cathedrals.  The secular and the religious are mixed together — you can see a depiction of the ancient port of Classe right next to a parade of saints, or the emperor Justinian hard by Cain and Abel.  Jesus, often beardless, is depicted as the Good Shepherd, rather than the crucified savior.

There are more depictions of animals — not just sheep, but ducks, birds, even deer.  And the dominant color is a wonderful marine green, rather than the blue that became more popular later.

There is also a significant difference in style between the earlier and later mosaics.  The late Roman mosaics, like late Roman fresco painting, had figures with vibrant faces and a sense of motion, while the Byzantine mosaics were more stiff and formal.  Sometimes you can see the difference in style in the same church.  In the Basilica of Sant’Appolinare Nuovo, the excited and happy Three Kings (in late Roman style) bring their gifts to a stone-faced Mary (completed 50 years later). 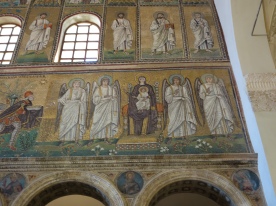 After the Byzantine capital was moved to Constantinople, Ravenna became the peaceful country town it remains today.  It became the last refuge and final resting place of the great poet Dante, whose exile from his home city of Florence was never rescinded during his lifetime.  After his death, the city of Florence, recognizing its mistake, tried to get Dante’s bones back, and even built an elegant tomb for them in the church of Santa Croce.  Nothing doing, said Ravenna, and Dante’s real tomb remains in Ravenna till this day.

In July, we visited the city of Urbino, which had its greatest prominence during the 15th C, under the rule of Duke Federico da Montefeltro.  Montefeltro was the archetype of the Renaissance prince — a famous condottiere (military leader) as well as a great patron of the arts.  During his 40-year rule, he surrounded himself with a brilliant court, and built many beautiful buildings, including the Ducal Palace, which is today a major art museum. 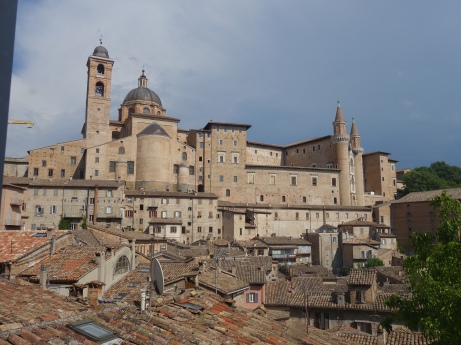 The great painter Raphael was born in Urbino, and is represented by a couple of paintings in the museum — most of his major work, though is elsewhere.  The museum also includes several works by the early Renaissance painter Piero della Francesca, one of the first to reintroduce perspective to European art.  I particularly love the Madonna here, with the angel whose carefully drawn pearl anticipates Vermeer, and with the baby Jesus and his incongruously pagan (but contemporaneously accurate) coral necklace — even today Italian babies are given coral necklaces to ward off the “evil eye.”

But the real glory of the Ducal Palace are the works of intarsio, or wood inlay.  Intarsio can be found all over Italy, but the examples here are like paintings, almost three-dimensional.  There are depictions of musical instruments, knights’ helmets and architectural tools.  But my favorite is the little squirrel — probably a “red Calabrian,” now almost completely replaced by North American varieties.

The city of Bolzano is in Alto Adige, a region which used to be part of Austria known as Sudtirol.  It was awarded to Italy after World War I.  Nobody ever asked the residents which country they wanted to belong to, and Mussolini’s policy of “Italianization” (encouraging ethnic Italians to move to the region) wasn’t too popular either.  These days, the region operates under a special regional autonomy agreement, and is officially bilingual, with everybody learning both German and Italian.  A lot of the local residents also speak excellent English, which I understand is widely taught in the public schools beginning at a young age.

For the tourist, the region represents a fascinating mix of Austrian and Italian culture — you can get cakes or biscotti, pizza or dumplings.  The photo of a local kiosk indicates the wide variety of food on offer.  It’s also one of Italy’s most interesting wine regions, featuring local grape varietals such as like Lagrein, new grape varietals like Kerner developed for the Alpine region, international varietals like Chardonnay and Pinot Noir. The town of Termano (Tramin in German) is also reputed to be the origin of the Gewurtztraminer grape.  So if you like wine at all, you’re likely to find something you like here. 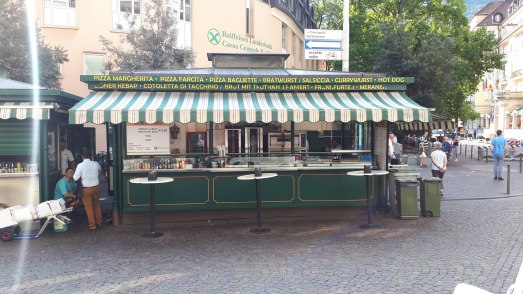 But the real glory of the area is its scenery.  Bolzano has a spectacular location at the foot of the Brenner Pass, at the western edge of the Dolomites.  One of the local mountains is called the Rosengarten (Rose Garden) because of the magnificent rose-pink hue it takes on at sunset.

The area is filled with hiking trails at all levels — during the course of a day’s hike, you will enthusiastic young hikers, old people with stout staffs, and families with their children and dogs.  You will also encounter pastured animals — cows, sheep, goats, even the occasional horse, which meant that once in a while, you had to navigate around a cow gate.  And, this being the Alps, at the top of the trail, there’s always a little cafe selling food.

Pork ribs, fries, and beer on top of a mountain. What could be better?

We stayed mostly on the easier trails, helpfully marked with baby prams to indicate they were flat enough for strollers.  Even so, I found that good hiking boots (which I bought here in Ascoli) and walking sticks (thoughtfully provided by our hotel) made a huge difference in navigating the sometimes uneven surfaces. 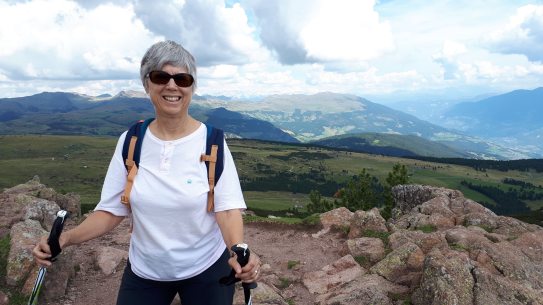 The scenery was breathtaking — I kept expecting Julie Andrews to come running over the next hillside filling the air with the sound of music.  We heard no yodelers (although we did encounter a couple of tuba players in one restaurant) and no little goatherds (although there was an old guy chivvying the cows along).  All in all, quite a marvelous experience.

Garda is Italy’s largest lake, despite the existence of another lake called “Maggiore” (the “biggest”) some distance west.  It is very long, with Alpine terrain in the north and palm trees along the southern edge.

The southeastern part of the lake was part of the territory of Verona in the 14th C, and the towns are dotted with castles built by the Scaligeri, the ruling family.  Sirmione, at the south of the lake, has one of the best-preserved examples of a Scaliger castle.  It also has the ruins of a 1st C Roman estate poetically known as Le Grotte de Catullo.  The Roman poet Catullus did indeed grow near Sirmione, but he was nowhere nears rich enough to live here.  The name of the enormously wealthy family that actually owned the estate has been lost to history.  The estate is a ruin today, of course, but a small museum has preserved some of the floor tiles and frescoes.  Its most remarkable feature, though, is its spectacular site, which has enchanted tourists for centuries. 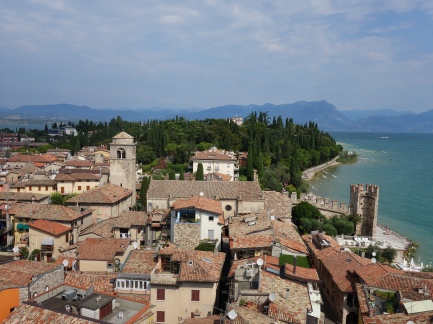 We also visited Gardone Riviera, on the western shore, which has a wonderful botanical garden (Heller Gardens), full of exotic plants and quirky statuary.

Our Italian friends were nonplussed that we didn’t take the opportunity to visit the house of Italian poet Gabriele d’Annunzio, also in Gardone.  Got to leave something for next time, I guess.  🙂