Italy is so rich in historic monuments that international tourists, most with limited time, have to focus on the major sites.  One of the nice things about actually living in Italy is that we now have time to visit many of the smaller towns, many with fascinating histories of their own.

One of these in Montedinove, located in the hilly region of the Marche, about 40 minutes from where we are now living.   There are traces of human habitation here from the 6th Century, but the town was not formally established until the 11th Century.  It was connected to the Abbey of Farfa, one of the most important abbeys in Italy at the time, and was the home of a garrison of Templars, who had establishments n various parts of Italy to help Crusaders crossing Italy to reach the southern Adriatic coast, and from thence to take ship to the Holy Land.  The Templars helped to resist a siege by the armies of Frederick II of Sicily in the 13th C, and perhaps for that reason you can still see vestiges of Templar symbols here, even though the order was officially suppressed for heresy in the 14th Century.  The town went into decline after the Middle Ages, and eventually became part of the Papal states, where it remained until the unification of Italy in 1861.  These days, Montedinove is a town of about 600 known mainly for its apples.

There are two interesting churches here, which unfortunately are rarely open — many small towns in rural Italy don’t have the resources to keep historic buildings open on regular basis.  Under the supervision of FAI, a private organization which raises money for the upkeep of historic buildings, a number of these smaller sites are open several weekends a year.  FAI partners with local schools to provide student guides on these weekends, which is both a great way for the students to learn local history and a real benefit for tourists.

The Church of Santa Maria de Cellis was founded in the 12th C, with a second church built on top of it several hundred years later.  The practice of building a new church on top of an older one is quite common in Italy.  Sometimes the older church is completely buried under the new one, although occasionally you can reach it through an interior staircase. In Montedinove, where the church is built on the side of a hill, you can access either the older or the newer church by separate entrances.

The church is best known for its Gothic portal, built in 1368, which includes many late medieval symbols that are difficult to interpret today.    On one side of the portal, there are flowers (unfortunately difficult to see) which are believed to be Templar symbols. 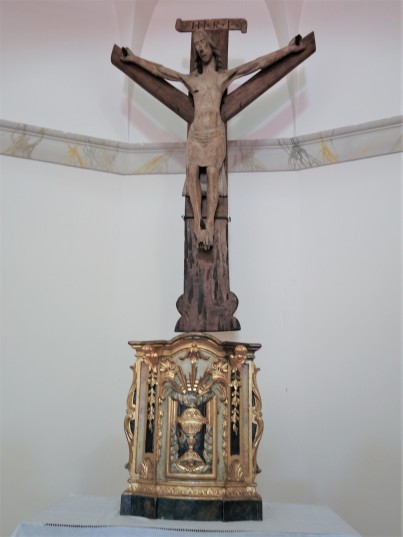 The upper church also has a 14th Century crucifix .  The suffering face of Jesus, and his muscular arms, anticipate the more humanistic depictions which became common in the the Renaissance a couple of centuries later.  No artistic revolution ever comes out of nowhere.

The 18th C church of San Lorenzo, whose interior is done in an unusually restrained Baroque style, is to my mind remarkably beautiful.

The town also has, rather surprisingly, a sanctuary dedicated to the English saint Thomas Becket.  Thomas studied canon law at Bologna (neither Oxford nor Cambridge had been established in his era), and made many Italian friends, who were quite distraught to hear of his murder.  Not long after, when an individual appeared claiming to have possession of some of Becket’s bones, the local monastery built a small sanctuary for it. During the 16th Century, the establishment became a sanctuary of another sort for English Catholic priests fleeing Tudor persecution.  You can still see the bones today, although the current building dates only to the early 17th Century.

The town also offers some magnificent vistas of the surrounding Apennines, which we took full advantage of – as well as the local wineries! 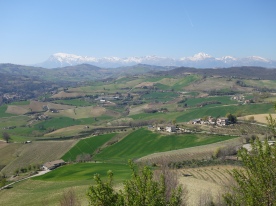 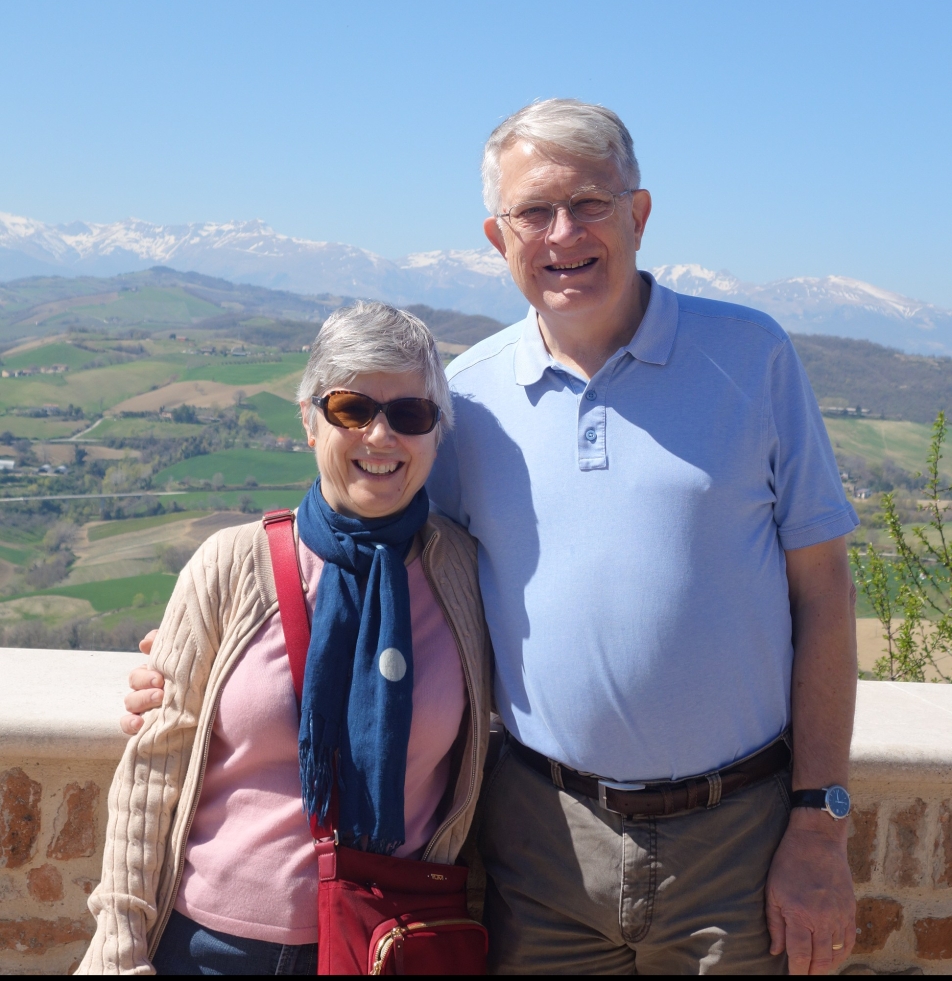