We took a brief trip to the East Coast of the US in early October for the celebration of my aunt’s 100th birthday.  For a variety of reasons, we took a flight out of Milan rather than Rome.  It takes about 5 hours to get to Milan from here, so we decided to stay overnight in Milan on both the outgoing and return legs of the journey.

During our brief stop in Milan, we were able to see two interesting art exhibits.  The first was a retrospective of the work of Giorgio Di Chirico, a 20th C Italian painter.  Di Chirico is known for his unusual style, sometimes called “metaphysical,” which depicted human forms in oddly distorted shapes and perspectives.  Over the course of his long life, though, he also did a lot of work in a more traditional style, even a few self portraits. 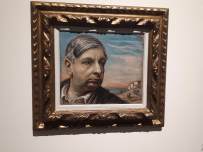 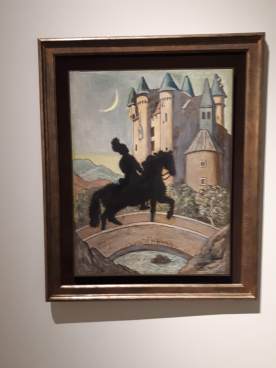 The second exhibit dealt with the impact of the opening of Japan in the 19th C on Western art.  Many European painters, especially Van Gogh, were fascinated by the flat perspective of Japanese woodblock paintings. Other painters just used the new fascination with “Japanism” as an excuse to dress up their girlfriends in kimono – sometimes with a very un-Japanese cigarette.  Japanese artists as well were influenced by their exposure to European art. 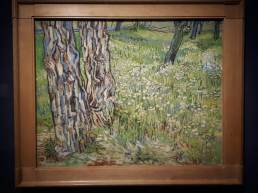 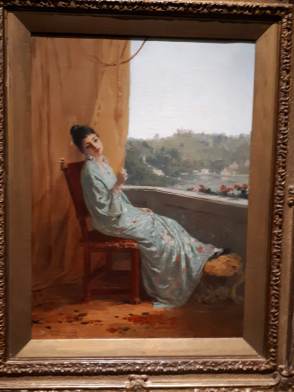 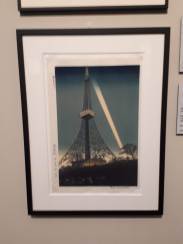 We were particularly interested in this late painting by Berthe Morisot, one of our favorite artists.  This work, which was done in 1894 just a few months before her death, seems to prefigure the abstract water lilies done by Monet some 20 years later.  Who knows where Morisot’s art might have gone had she lived a bit longer.

There was an unexpected surprise at the beginning of the exhibit – a chronicle of a several earlier Japanese embassies to Europe, during the last decades of the 16th C.  The first embassy, which included young Japanese converts to Christianity escorted by Jesuit missionaries, were received by the King of Spain, the Pope and the Doge of Venice, where one of the young Japanese was painted by Jacopo Robusto “Tintoretto,” son of the more famous Domenico.  This portrait is particularly interesting in that it doesn’t exaggerate the young man’s Asian features or skin tones – it’s a realistic portrait, not a caricature.  The exhibit also includes some very rare artifacts of Japan’s early experience with Christiainity, including a host carrier with the Latin letters for Jesus imprinted on a lacquer box, a crucifix with a Buddha figure placed where a crucified Christ would generally be, and a Madonna with strikingly Asian features.

These early embassies came to naught.  In the early 17th C, the Tokugawa shoguns prohibited Christianity, expelled the missionaries,  and closed the country to European visitors.  It would be another 250 years before regular communication between Japan and the West was re-established.

We stayed in Milan’s Navigli district.  During the era when most travel went by water the city was supplied by a series of canals.  These days, the Navigli district is a neighborhood of smaller hotels, restaurants, wine bars, and boutique shops, popular with tourists and locals alike.  This picturesque district is only a few minutes from the Duomo using the city’s excellent public transportation system.

Hopping over “the pond”, we stayed in Manhattan a few days, meeting up with some old college friends as well as recently relocated Californians.  We mostly ate Asian food which we don’t get much opportunity to sample here in Ascoli Piceno – dim sum, Korean barbecue, creative Thai. 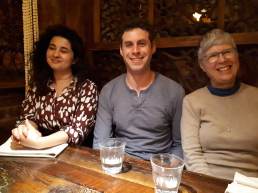 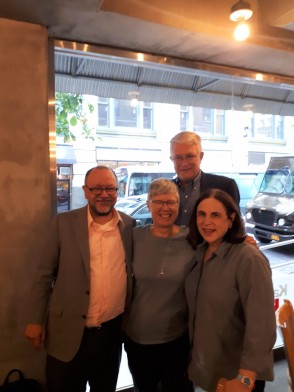 Although we both grew up in New York City, neither of us has spent much time there in recent years, so we used the opportunity to play tourist and do things the people who live in the city rarely do.  We visited the observation deck of the Empire State Building, which offered spectacular views of New York’s ever-changing skyline.

We traveled to my cousin’s home in Redding, Connecticut, to celebrate the 100th birthday of my aunt Elsie, my late father’s younger sister.  VIrtually all the family members living on the Eastern seaboard were in attendance, including aunt Elsie’s one surviving brother, all 8 of her nieces and nephews, most of her grandnephews and nieces, and even a few great grands. All of us cousins spent a lot of time together when we were younger, but it has been years before so many of us were together in one place.  It was great to see everyone again. 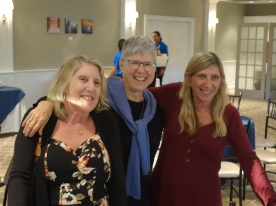 Unusually for a single woman of her era, my aunt traveled a lot when she was younger, including a trip to Italy that might have indirectly inspired my own first journey there as a teenager.  Although my aunt uses a walker to get around these days, her mind is still sharp, and she is still in the “independent living” section of the combined independent/assisted living facility she moved into 3 years ago.  We can only hope our own old age will be as rewarding. 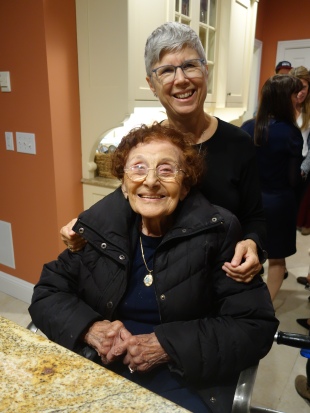 After the party, we spent a few days in western Massachusetts who old friends from California, who now live in Amherst.

We took the opportunity to visit the Clark Museum in Williamstown, which is known for its collection of American art. 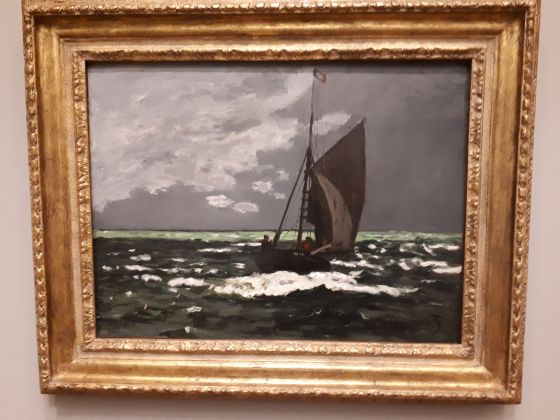 It also has a couple of more traditional paintings by Berthe Morisot, although you can see that even her still life is a little subversive.

This is a beautiful museum in a spectacular setting, particularly at the beginning of a New England fall, and I recommend a visit o anyone who happens to be in the area,

We ended the trip by visiting Ted’s family in Chatham, Massachusetts, on Cape Cod.  Although I had hoped to spend time walking on the beach, our three days coincided with a “noreaster,” a storm with winds so strong it was difficult to open the car door, let alone casually stroll along the water.  I felt like the one of those poor guys the Weather Channel sends out for first hand reports whenever there’s a big storm.  We had a good time catching up with folks nevertheless.  And we made sure to enjoy some delicious lobster! 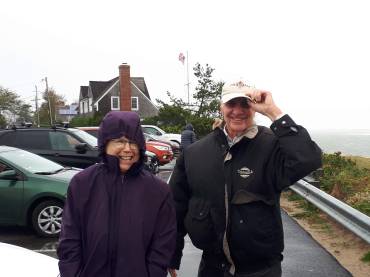 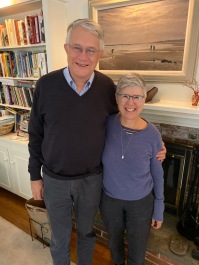 Some of you may be wondering what it was like to be in the US after having been away for the better part of two years.  Too much ice, too much sugar, too many big cars.  We really appreciated the cheap gas, though.